Judith Grohmann in an interview with the Abbot of the Monastery of Holy Cross, 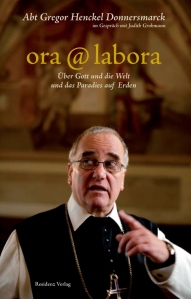 ora @ labora – on god and creation and the paradise on earth

Is God the better manager? The abbot of the “singing monks” answers questions that affect us all.   The basic motto of Saint Benedict – “work and pray” – is followed in the monastery. Does that make monks happier people? Doesn’t an abbot also have to function as a crisis manager? Abbot Gregor Henckel Donnersmarck, who had a successful business career as manager of a worldwide operating group in Spain before he heard the calling, explains the author Judith Grohmann in a book long interview how he and his community in the Monastery of the abbey Holy Cross are dealing with the trials and tribulations of everyday life. He also talks about the reasons why the monks’ prayers on the album “Chant – Music for Paradise” were sold over a million times worldwide and topped the music charts. Abbot Gregor bases his beliefs on the three Christian virtues „faith“, „hope“ and „love“, which are supported by the four Cardinal virtues „temperance“, „prudence“, „fortitude“ and „justice“. He shares his personal experiences with the readers of this book to illustrate, why religion, spirituality and values are such important sources of strength in times of crisis.

2nd edition with a foreword from director and screenwriter Florian Henckel von Donnersmarck who won an Academy Award for Best Foreign Language Film in 2007 for his movie „The Lives of Others“. Florian is the abbots nephew and he currently lives in Pacific Palisades, Los Angeles.

In January 2012 „ora@labora“ has been published as a paperback at Herder Verlag in Germany.